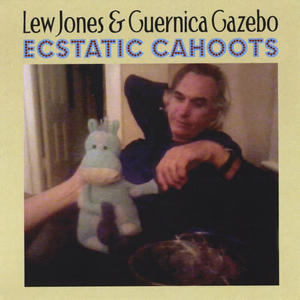 Lew Jones and Guernica Gazebo have released a new CD entitled called Ecstatic Cahoots. The songs were recorded in Portland and Los Angeles over the past several years by Brad Rapp, Michael Lastra, Jon Lindahl and Andrew Basil Walsh. The best songs were chosen and it was finished at Fresh Tracks Studio in Portland Oregon in March 2011. The results are a creative blend of excellent singing and advanced guitar... especially from Jazz great Brad Rapp. Guernica Gazebo is a DIY project.Lew's label was Itsaboutmusic for the last five years, and now is CDBaby.com. Many thanks to Dean Sciarra for all his support and work with Itsaboutmusic.

The CD has been well received with a release date set at Music Millennium set for Friday May 20th at 6pm. Check out the You Tubes promo videos-'Guernica Stomp' and 'Blue Cow does big country' to get in the mood for the CD you will have to buy.

Musicians on the CD include Ken Woodside (Shorty and The Mustangs), Dennis Elmer(The Lew Jones Band, Brothers of the Baladi), S.P.Clarke (

播放列表
Update Required To play the media you will need to either update your browser to a recent version or update your Flash plugin.